This guided historic walking tour explores the history of the Old Bloomfield Cemetery through the stories of citizens buried there. Founded in 1786 and previously known as the Bloomfield Weston Cemetery, it was located at the most southern Heywood lot in an area of town once known as Bloomfield. 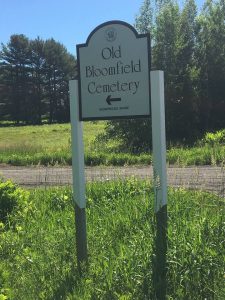 This cemetery holds the dust of the earliest settlers of Old Canaan – the Heywoods, Westons, Whites, other pioneer families and several soldiers from the Revolutionary and Civil Wars. The oldest inscription (though perhaps not the oldest stone) is that of Joseph Weston who died in 1775 while on the unsuccessful Benedict Arnold march to Quebec. Many of the other monuments are slate slabs with a customary decoration of urn and weeping willow carefully delineated. There are older ledge rock monuments – but unfortunately many are broken with obliterated inscriptions.
The Old Bloomfield Cemetery is located about two and a half miles south of Skowhegan on the left side of Route 201 (Waterville Road). The signage directs visitors to a privately owned gravel driveway that leads directly to the cemetery.