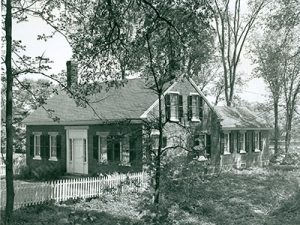 The Greek Revival cottage that would become Skowhegan History House was built in 1839. This site, on the eastern bank of Maine’s Kennebec River just upstream from Skowhegan Falls, had previously been important to the Abnaki people who gathered here seasonally to fish and plant crops.

After the first settlers arrived in the late 1700’s, a potter’s shed was built here, and clay from the riverbank was used to make glazed earthenware for use in the growing community. Samuel and Joseph Philbrick purchased the property in 1799 and continued to manufacture pottery. A blacksmith named James H. K. Lord, known locally as “Deacon Lord”, bought the property in the 1830’s. Lord hired a contractor named Aaron Spear to build the present brick cottage. The Deacon and his wife moved in as newlyweds in the summer of 1840 and set about raising a family. Ten children were born over the next twenty-three years, and the deeply religious Deacon told the neighbors that he was teaching his children to “Fear the Lord and sing in the choir!”

In 1863, the Lord’s sold their home to a retiring farmer, Abraham Tilton, a widower who moved in with his two young daughters, Sarah and Abby. After Tilton’s death the sisters continued to live out their days in the cottage, neither having married. They seemingly were rather quaint characters, squabbling with one another and passing sharp-tongued judgments upon those who passed by on the sidewalk. A story was told that when metal window screening was introduced in the late 1800’s, Sarah had an insect screen made for her bedroom window. Sarah was pleased with the result and urged Abby to have one also. Abby replied, “Nonsence, Sarah, I ain’t breathin’ none of that strained air!”

Sarah passed away first and Abby died at 89 in 1908. The house stayed vacant for many years and fell into very poor condition. At different intervals, the old house was used as a warehouse by Central Maine Power Co., and the grounds were piled high with logs being held for the sawmill downstream by the Skowhegan Log Driving Co.

In 1936, Louise Helen Coburn purchased the property and immediately set about restoring it and adding a museum room. Louise Helen Coburn was the daughter of a prominent Skowhegan lawyer, Stephen Coburn, and the niece of former Maine Governor Abner Coburn.

Although born into a position of financial independence, Louise grew up as a hard worker and a gifted student. She became the second woman to graduate from Colby College, having helped found a women’s sorority there. She later became a Colby College Trustee, was an important financial supporter, and actively promoted higher education for women.

Miss Coburn trained as a botanist and became a writer on that subject. She later published a number of works of her poetry and informational pieces. Later in life she took on the huge task of writing a comprehensive history of Skowhegan, published in 1941 as Skowhegan on the Kennebec.

In the process of this writing, she accumulated a large volume of Skowhegan memorabilia and museum quality objects. Her purpose in acquiring the Tilton cottage was to create a space to keep and display her own material as well as many donations of important historic items from other Skowhegan families. The restored cottage was filled with antiques, furnishings and items of everyday living. Her vision was for visitors to pass through a home that was a slice of life from the mid-1800’s.

She filled the museum addition with old town records, newspapers and artifacts with local provenance. Interestingly, Louise Coburn took on this task of museum building at the age of eighty years and continued work until her death in 1949 at ninety-three.

In Miss Coburn’s will, she created a new non-profit corporation, the History House Association, to manage operations and keep the facility open to the public on a seasonal basis. For nearly sixty years, History House has been open to the public on a posted schedule. Generations of students have fond memories of class visits to History House, where many had their first glimpse of how people lived one hundred fifty years ago. Frequently these people, now parents, bring their own children to share the experience.

To this day, the History House represents the legacy of an historic community for everyone’s benefit and appreciation. 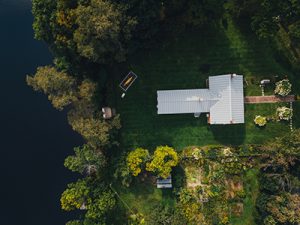